How is a folk singer like a movie star? Only Jeff Daniels really knows 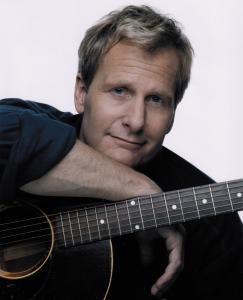 Given Jeff Daniels' leading-man looks and understated style, his film career has been remarkably adventurous; from playing George Washington to Jim Carrey's dumber half; a psychotic killer to the absurdly self-absorbed parent in "Squid and the Whale."
He's also always been a closet songwriter, but only recently began treading the folk stages. Like his acting, his pretty, plainspoken songs shimmer with self-revealing wit and emotional truth. He spoke from his home in Chelsea, Michigan.

Which came first, the actor or the songwriter?
What came first were musicals in high school. Music was always part of acting for me, until I went to New York, and it became 'Serious acting is what we're interested in; leave the music behind.' But I had a guitar, and wanted music to be in my life somehow. So the guitar became my diary, and my friend.

You're very disarming about your songwriting pretensions. On the first track of your live CD, you musically thank Russell Crowe, Billy Bob Thornton, Jennifer Love Hewitt, and - most of all - William Shatner, for placing the bar so low for actors who want to sing.
Because I'm known as an actor, I knew I would go into any live performance with an 0-2 count. People would be thinking, you know, who do you think you are? So I decided to go right at that.
Also, I've always loved comedy, and how funny sets up serious. Last time I looked, the Greeks were holding up two masks, and they're equal. Songwriters like Christine Lavin, Cheryl Wheeler, Loudon Wainwright, and John Prine, they're not afraid to be funny. And in folk, that doesn't mean the song is going to be dismissed, the way it often is in acting.

How did you get drawn to songwriting?
The first concert I ever saw was Arlo Guthrie in Detroit. I admired the storyteller in him, and in Steve Goodman and John Prine; and later on, in Lyle Lovett, Loudon Wainwright, and Christine Lavin. I was always drawn to people who could use the guitar to tell a story. Because when you break it all down, that's all we're really doing, whether it's a film, a book, a play, or a song.

Why did you want to peddle your musical wares in the folk arena?
In pop or rock nowadays, you're dealing with corporate, aiming at something that's been decided for you already. Whereas, in folk music, there seems to be a purity; you can write what you feel, and no one's in it for the money.
Walking on a stage, with just a guitar, is similar to theater for me, in that you have to connect with that audience. If you don't, it's just self-indulgence. In film, it's different; you're kind of flinging things at the lens, and hoping the editor knows what he's doing. Walking on a stage with my guitar, I've got that theater thing back, that need for a human connection.

Which creative muscles are the same for you in songwriting and acting?
I think when you're on any stage, it's about losing yourself in a way that lets people in. They say that in film, it's done with the eyes; and in theater, it's done with your body. As a songwriter, you only have the song. That's hard to do; it takes being constantly aware of the audience.
It's got to be done by the simplest means, because it's just you, a voice, and a guitar. That's the great challenge. It's all about what you've written; and the willingness of the audience to take a ride. So it's not just up to you; that's the beauty of folk music. You need their imagination, and folk audiences are so patient, so willing. They're like, 'We've paid our money, take us somewhere.' When you can do that, man, it feels great.

Originally appeared in the Boston Globe